Diagonal pliers are mainly used to cut wires and excess leads of components. They are also commonly used to replace ordinary scissors to cut insulating sleeves and nylon cable ties.

The knife edge of Diagonal Cutting Pliers can be used to cut the rubber or plastic insulation of flexible wires. The knife edge of the pliers can also be used to cut wires and iron wires. When cutting No. 8 galvanized iron wire, use a knife to cut back and forth around the surface a few times, and then only need to pull it lightly to break the wire. Guilloches can also be used to cut hard metal wires such as wires and steel wires. Electricians often have various specifications such as 150.175.200 and 250mm. It can be purchased according to the needs of internal or external work types. The teeth of the pliers can also be used to tighten or loosen nuts. Diagonal pliers is one of the small hardware tools, also known as "diagonal pliers". It has the broadest function and is an indispensable tool in daily life and work. 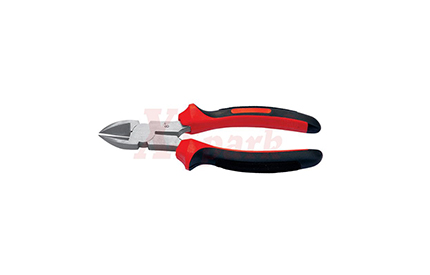 In addition, the sizes of diagonal pliers on the market are generally divided into: 4", 5", 6", 7", 8". Those larger than 8" are relatively rare, and smaller than 4". Generally, the market is called mini diagonal Clamps, about 125MM.

The function of diagonal pliers was mainly to cut off wires, 2.5 mM&SUP 2. The single strand of copper wire is very hard to cut, and it is easy to cause pliers to be damaged. Therefore, it is recommended that the diagonal pliers should not cut 2.5mm&SUp 2. Above single-ply copper wire and iron wire. In the size of the choice of 5 ", 6 ", 7 "mainly, ordinary electrical wiring choice of 6", 7 "cutting ability is relatively strong, shear effortless. Circuit board installation and maintenance mainly 5 ", 6 ", easy to use flexible, long time use is not easy to fatigue.4 "is a mini pliers, only suitable for small jobs.

Use pliers according to your strength. Do not use pliers to cut steel wire, steel wire and copper wire that is too thick. Otherwise, it will easily lead to teeth collapse and damage of forceps.

Personnel using tools must be familiar with the performance, characteristics, use, storage, and repair and maintenance methods of tools. The use of pliers is right-handed. Turn the jaws of the pliers inward to control the cutting part of the pliers. Put your little finger between the two grips to press against the grips, and open the head of the grips to separate the grips flexibly.

We are diagonal pliers suppliers, if you are interested in our products, please feel free to contact us.

Next: How to Use Diagonal Pliers?