Proper Use and Precautions of Explosion-Proof Tools

First, when using a tool, its variety and specifications should be reasonably selected according to the needs. It should not be replaced by a small one, nor should it be used as a steel tool. It should be noted that when using adjustable wrenches, pipe wrenches, and open wrenches, attention should be paid to the direction of the force, and no arbitrary twisting is required. When using a tool with a blade, the hardness of the workpiece itself should be measured first. The use of tool hardness should be prohibited. When the workpiece is tightened by motorization, semi-permanently fixed or corroded, and no other measures are taken before using the hand tool, the user should be prohibited to avoid damage to the tool.

Second. After the explosion proof tools are disabled, they should be wiped clean at any time. Those who do not use it within half a year should be oiled or preserved by the anti-corrosion method. Those who have been out of use for more than one year should be oiled and stored in bags or boxes. Some parts of the used tools are naturally worn or damaged, especially tools with blades, which can be repaired in non-hazardous locations. If the damage and wear are serious and it is not suitable for self-repair, it should be scrapped and not allowed to work with disease.

Third, when using Explosion-proof Hand Tools, try to use it in a dry environment as much as possible, if it is unavoidable to use it in a humid environment, try to speed up the operation speed, reduce the working time, and prevent the occurrence of a large degree of corrosion Danger. Wipe clean at any time after use, and it is strictly forbidden to put in a box with corrosive substances.

Fourth, all types of wrenches of explosion-proof hand tools have different rated strengths. It is strictly forbidden to use casings for overloading. Except for striking wrenches, other tools must not be struck, so as to avoid fracture and deformation due to overload and affect normal use. 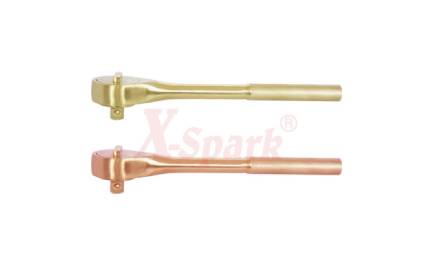 Shears and Pliers manufacturer introduces to you: Problems to be noticed in the application:

1) When the tool collides with the rock, there is a possibility of sparks. In this case, spark generation has nothing to do with metal. When the rock crystal breaks under tension, the mechanical energy of the impact becomes electrical energy. This electrical energy is released in the form of electric sparks. Sparks are particularly easy to produce in rocks containing quartz, silicon oxide, and sandstone. In general, the higher the content of quartz in the rock, or the larger the particles, the easier it is to ignite. In order to prevent the occurrence of explosion accidents, the rocks can be immersed in water before operation.

2) When impacting or rubbing hot steel workpieces (pipes, heat containers, bolts, nuts, etc.) coated with aluminum paint with explosion-proof tools, sparks that can ignite explosive substances may be generated. If the powder particles of aluminum, magnesium, and their alloys adhere slightly to the surface of steel with rust (iron oxide), a violent exothermic "aluminum heat" may occur when hit by hard objects or even hard rubber or plastic. "Reaction" is likely to detonate.

Next: Basic Knowledge of Explosion-Proof Tools