1. Explosion proof tools, internationally known: safety tools, non-sparking tools, users must choose products that have passed nationally recognized explosion-proof performance inspection and testing, and they must carefully understand the scope, performance, characteristics, and use specified in their instructions Methods and precautions.

2. Explosion-proof tools should identify the gas area before use, and determine whether the tools used have reached their explosion-proof performance.

3. Explosion-proof tools should not be used arbitrarily as ordinary tools in non-dangerous places, so as not to lose its proper performance.

4. Explosion-proof tools are high-strength and corrosion-resistant in most flammable gases. But it is not resistant to corrosion in all cases. For example, in humid ammonia, acetylene, certain ammonium salts, fluorine, chromium, ammonium, and some dichromate media, the degree of corrosion is considerable. Some media will react chemically with copper alloys when they come into contact with them, generating highly explosive substances, such as the combination of acetylene and copper to form copper acetylene. Therefore, when using explosion-proof tools, in a dry environment as much as possible, if it is impossible to avoid using in a humid environment, try to speed up the operation speed, reduce the working time, and prevent the danger of large corrosion. Wipe clean at any time after use, and it is strictly forbidden to put it in the same box with corrosive substances. 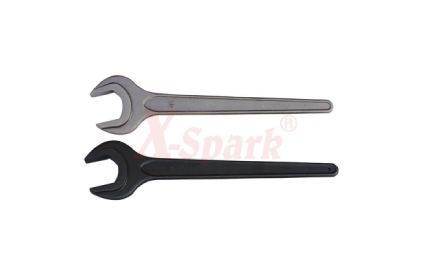 5. Various types of wrenches of explosion proof hand tools have different rated strength. It is strictly forbidden to overload the casing, and other tools are not allowed to strike except the wrench, so as not to cause fracture and deformation due to overload. It affects normal use. When using a tool, its variety and specifications should be reasonably selected according to needs, and it must not be replaced by a small one, let alone use it as a steel tool. It should be pointed out that when using explosion wrenches, pipe wrenches, and dead wrenches, pay attention to the requirements of the direction of the force, and do not twist arbitrarily. When using a tool with a blade, first determine the hardness of the workpiece. It can be operated when its hardness is close to the hardness of the tool, and its use is prohibited when its hardness is higher than the hardness of the tool. When the workpiece is screwed by motor, semi-permanently fixed or corroded, and no other measures are taken before using the manual tool, it should be prohibited to avoid damage to the tool.

6. After the explosion-proof tools are disabled, they should be wiped clean at any time. Those who are not used within six months should be oiled or preserved with the antiseptic method and should be oiled and put into bags or boxes for storage for more than one year. Some parts of the used tools are worn or damaged, especially those with blades, which can be repaired in non-hazardous places. If the damage and wear are serious and it is not suitable to repair it by yourself, it should be scrapped and not be operated with illness.

7. When an explosion-proof tool and a rock collide, there is a possibility of spark generation. The generation of sparks has nothing to do with the explosion-proof tool. When the rock crystal ruptures under tension, the impact mechanical energy becomes electrical energy. This electrical energy is released in the form of electric sparks. Sparks are particularly easy to produce in rocks containing quartz, silica, and sandstone. The higher the content of quartz in the rock, or the larger the particles, the more likely it is to ignite. To prevent an explosion, immerse the rock in water before proceeding.

8. When the explosion-proof tools collide with or friction with steel hot workpieces (pipes, heat containers, bolts, nuts, etc.) coated with aluminum paint, there is a possibility that a third party may cause sparks. For example, the particles of aluminum, magnesium and their alloys slightly adhere to the surface of steel with rust (iron oxide). When they are hit by hard objects or even hard rubber or plastic, a severe exothermic "aluminum reaction" may occur. It is likely to detonate.

9. In 1991, Professor Pan Qihan of Beijing Nonferrous Metal Research Institute of China told the market clearly that beryllium bronze is the most suitable material recognized by the world for explosion-proof safety tools. Some people in China use other miscellaneous copper to make explosion-proof tools, which are very dangerous, and they are not recognized internationally.

Next: What Should Be Noticed when Using Explosion-Proof Tools?